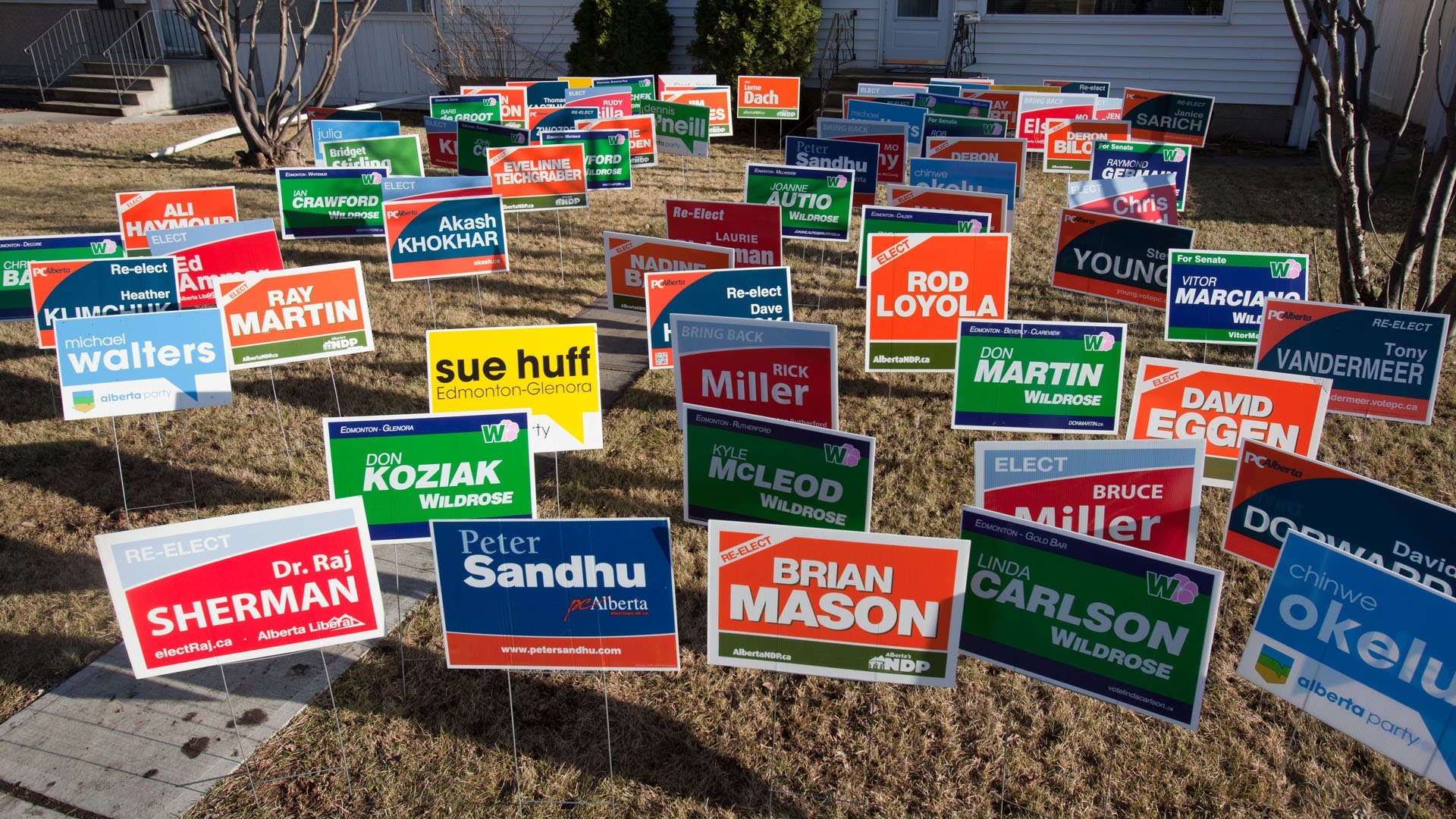 During the 2008 Presidential Election, John McCain’s campaign selected a font named ‘Optima’ for their marketing material. This is the same typeface that’s used on the Vietnam Veterans Memorial. Was such a font match merely a coincidence?

People are more likely to remember specific messages when they see something familiar. His campaign recognized that they could use font to illicit reminders of McCain’s military history.

Designers believe that the letterforms of a slogan carry as much of a message as the words themselves.

So when Barack Obama needed his campaign to pick up more momentum, his team switched their font choice to ‘Gotham’. The selection contrasted with the other commonly used political font choices at the time. Gotham represented something new and bold - which matched Obama’s messaging at the time.

Hoefler & Frere-Jones, a type foundry, created Gotham for GQ Magazine. In an interesting series of events, Mitt Romney’s 2012 campaign selected a typeface named ‘Mercury’ - which was designed for Esquire Magazine. Hoefler & Frere-Jones actually designed that one, as well. That’s right. One company was responsible for creating both primary fonts in the 2012 election (and some of the secondary fonts, too).

Where else can we find the Gotham typeface? One World Trade Center.

When Obama won in 2008, the font quickly became a political bestseller. During the following House election, 69 different congressional candidates (on both sides of the aisle) used the Gotham font in their branding. Why did so many choose this font? Simple. It offered a track record of success.

The Obama campaign had to adjust their branding to stand out from all the others who tried to imitate what worked so successfully. Also - with Romney’s font choice offering a similar level of cultural recognition, Obama’s team realized they had to come up with something new.

Can a president just drop all their branding and switch to something brand new? No. As we said earlier - People are more likely to remember specific messages when they see something familiar. However, those same people often find themselves drawn to fresh branding. Campaigns running for reelection need to strike a balance between these two competing objectives.

So how did the campaign differentiate their branding? The team behind Gotham (H&F-J) created a new version for Obama’s 2012 campaign – giving it serifs.

Serifs are the small feet added to the end of each letter.

Font choice, kerning, and serifs might seem like an unimportant detail to our everyday lives, but could you imagine if everything around you was written in Comic Sans? Text messages, books, advertisements, album covers - if everything had the same font, life would be dull.

Different endeavors call for different fonts. This is especially true for marketing.

For articles and website copy, we’re looking for font readability more than anything else.

For signs, headers, and posters, our typography decisions allow us to tether emotional qualities to our words and sentences.

So what emotional qualities are current Democratic candidates and Donald Trump trying to push with their font choices?

Snapchat and Apple Maps have both used Avenir as their principal font. Fitting that two tech companies chose a font whose title actually translates to “Future” in French.

The Consumer Financial Protection Bureau uses Avenir Next as it’s primary font across both print and digital formats. It works well in both mediums.

When we read a new sentence in a familiar font, our subconscious blends the line between the two. In theory, someone can borrow credibility from another entity by choosing an identical font, design, color palette, etc.

His campaign is using the same font as the Bloomberg corporate typeface. Mike isn’t using new branding as he’s been in the public eye for awhile. He can leverage that recognition that’s already been built for him.

Avenir Next is a minimal sans-serif typeface.

Serifs were invented as a way for stone carvers to lead in to a carved stroke. Without them, a stone carver’s lettering would have looked sloppy and uneven. In 1816, the very first sans serif print type was invented by William Caslon IV of England. This was a big deal for the printing industry. Sans serif made text-heavy newspapers easier to read.

Brother 1816 is a strong sans serif that was created in 2016 to celebrate the 200th anniversary of the first sans serif printing type.

The font has a geometric focus that helps amplify personality when placed in poster headlines.

In Biden’s actual logo, they edited the Brother 1816 font in a few places. The most important change was to replace the “E” with 3 horizontal red lines that can be interpreted as stripes.

Do you think his logo bears a vague resemblance to Obama’s old logo?

It’s not easy to create a really great font from scratch. Type foundries exist to tackle this problem. They serve a variety of niches: digital, print, newspapers, etc. The team that invented Halyard consisted of 10 members (only 9 of whom were human).

Andrew Yang’s platform is centered around the belief that AI/machine learning/robots will ultimately take most of our jobs away. In a very ironic turn of events, the development team behind Halyard included a robot named iKern.

The word “Halyard” is a sailing term. It’s a line used to hoist a sail, flag, ladder, or yard. When shipmen slur the phrase, ‘haul yards’, it often sounds like ‘halyard’ (hence the name).

Every president tries to choose a font that demonstrates strength. This typeface balances that strength with qualities that most designers describe as approachable, playful, and soft.

Industry is a sans-serif typeface that was designed by a company named ‘Fort Foundry’ in 2014. The design features geometric, flat-sided letterforms in a style that brings to mind vintage posters and signage. The font is intended to be versatile. Another designer said that "the typeface can give off an industrial futuristic vibe or a refined vintage". Yeah, I don't know what either of those things mean but maybe?

Pete’s design team made all their brand work public. It's an interesting tool that allows users to make their own branded Pro-Pete marketing material. Check it out here.

Jubilat is a slab serif typeface that was released through Darden Studio in 2008. If you’re not familiar with branding, a slab serif is technically a serif typeface. The word slab implies that the letters contain large and bulky serifs.

Jubilat was developed with input from publication designers on multiple continents. This font is commonly used across several countries, which means the font works well across multiple languages. As Bernie’s campaign is centered around inclusion, this seems to be a fitting choice.

Remember the company behind Obama’s ‘Gotham’ font? The Beatles of the typography universe, Hoefler & Frere-Jones?

In 2014, Frere-Jones told the typography world that Hoefler was trying to scam him out of their business together. Hoefler claimed that Frere-Jones was not an equal partner of the company, but rather, just an employee. Frere-Jones sued. He described Hoefler’s business actions as “treachery and sustained exploitation of friendship, trust, and confidence”. Apparently, he had the emails and chat logs to back up his claims.

They settled out of court and Hoefler changed the name of the type foundry to 'Hoefler & Co'. This independent venture (H&Co) has since created a typeface named Ringside, which Elizabeth Warren has selected.

Warren is the only candidate to use a Liberty Green color - a distinct change from the traditional red, white, and blue political color palette. H&Co's Ringside typeface is the official typeface of The Office of Barack and Michelle Obama. It seems as though both Biden and Warren are intentionally referencing Obama’s branding as a means to connect with voters.

Every time I see a red hat, I instantly assume it’s a MAGA hat. Regardless of your beliefs about Donald Trump, there is no denying that his branding is the most prominent out of the whole candidate field. The Trump brand is powerful. Depending on your side of the aisle - it’s powerful and impactful for wildly different reasons.

Times New Roman began as a challenge. A font designer named Stanley Morison criticized London’s newspaper ‘The Times’ for being far removed from the current typographical trends. The Times challenged him to create something better. It’s become the norm since then.

But now we see Times New Roman so frequently that we wouldn’t dare use it for our own website. We used it in our 9th grade history papers! Now when Times New Roman appears in a digital format, it connotes apathy. It says, “I submitted to the font of least resistance.” Times New Roman is not a font choice so much as it is the absence of a font choice.

Despite being a wack web choice, the font definitely serves a strong place in offline branding. After all, it became one of the most popular and influential fonts in history and the standard typeface on most desktop computers.

It’s worth remembering that a single font can be great for print but terrible for online content - and vice versa.

Here are the other fonts that Trump has used:

There’s an important example we can use from Trump’s branding. It’s worth noting that different mediums, businesses, and ventures call for different font choices. His campaign website is trying to accomplish a goal that is different from the White House website.

People visit these sites with different intentions. One is meant to round up support, the other is meant to inform. As we communicate with various groups - potential customers, current customers, business partners, and the media - marketing teams need to keep this differentiation in mind.

When you’re selecting a font for your business, you need to understand how the typography will play out in a font hierarchy. The titles, subtitles, and body each serve a different purpose. As long as you’re intentional about your decision, it doesn’t matter what fonts you choose. There’s not a right or a wrong answer - just different directions for your website or ad.

Determine the objective of your copy and decide how font can help assist that objective. Your font choice can say as much of a message as the words themselves.

If you need any help, please don’t hesitate to reach out. We’re the Sans Sheriffs around here.

Drop us a line
estimate your project